There's a music festival coming to Hervey Bay! I thought my days of attending easily accessible day or weekend long music festivals was left long behind me in London. So the inaugural Fraser Coast Music Fest on Sunday 2nd June, 2013 is a definite SilverLining in Pickle's and my new simplified life. Even better, it's FREE! 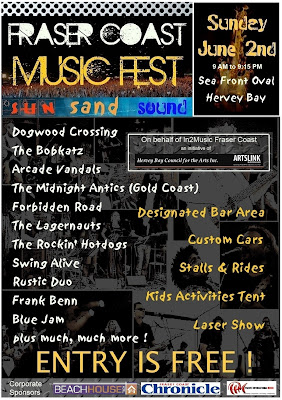 The day will be filled with music by local bands and artists across three stages. I've been somewhat - pleasantly - surprised at the level of home-grown talent. I've been lucky enough to see a number of performances in the five months since I moved to Hervey Bay, particularly enjoying Frank Benn, Dogwood Crossing and Sam Hutchinson, who will all be performing at the festival.

I'll definitely be taking Pickle along, as he loves listening to music, and it promises to be a family friendly event. There will also be stalls, rides, a kids activities tent, a car show, food, a bar, and a laser-light show finale, so it sounds like there's something for everyone. Tell your friends - if this year's event is a success, there are plans to expand it to a two-day festival next year... See you there!

Are there any other local bands or artists I should be keeping an eye out for?

I'd love to hear your thoughts!